Enjoy a members-only fine dining experience worth dying for with the bloody sequel to one of the best live-action manga adaptations in years. It’s ghoul vs ghoul as Kaneki must confront a gruesome gourmand who hungers for a certain flesh in this new take on the best-selling manga. 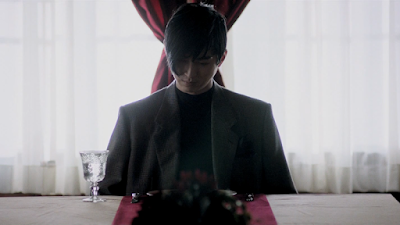 Growing accustomed to his new life as a half-ghoul, Ken Kaneki (Masataka Kubota) is determined to protect his new allies at Antiku from the anti-ghoul forces that seek to eradicate them. However, when the infamous gourmet Shu Tsukiyama (Shoto Matsuda) wishes to savour his unique flavour, it’s ghoul vs ghoul as Kaneki must fight his way out of the already-grim ghoul society’s twisted underbelly.

In a world where anime and manga fans are increasingly skeptical about live-action adaptations, the first Tokyo Ghoul was a terrific surprise, faithfully bringing one of the most popular manga series of our time to life as an exciting, heartfelt, and bloody film that was enjoyed by new and existing fans alike.

The first film was a huge hit when it launched on Screen Anime in March 2021, with its #ScreenAnimeParty Twitter watchalong being our most popular ever, making the hashtag a curated trending topic!

Taking the helm for this highly anticipated follow-up, director duo Takuya Kawasaki and Kazuhiko Hiramaki show their love for Bryan Fuller’s Hannibal with enticing glamour shots that make us salivate over dishes that would otherwise turn our stomachs. Joining the cast as a villainous foodie out for extra forbidden meat, Shoto Matsuda expertly crafts a sinister yet sophisticated foe with scene-stealing seduction.

TOKYO GHOUL S embraces its horror aspirations more than ever before, becoming brilliantly unsettling as we watch Kaneki through the predatory lens of his first real foe. A creepy, brutal, and brilliant follow up sure to please horror and anime fans alike.

Released on 25th April, exclusively on Screen Anime. The channel is available via your PC web browser, on iOS, Android, and Amazon Fire TV from only £3.98 per month. For more information, visit www.ScreenAnime.com.