TetroVideo is proud to present CANNIBAL and THANATOMORPHOSE on UK DVD and Blu-ray. 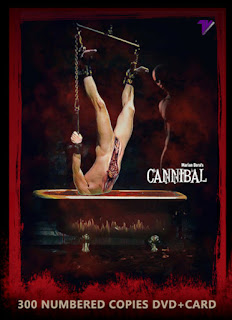 CANNIBAL is the story of a mentally disturbed man with cannibalistic fantasies. He makes a deal with a suicidal man who agrees to let the cannibal eat him.
Carsten Frank and Victor Brandl star.

Written and directed by Marian Dora (Carcinoma), CANNIBAL is based on the true story of Armin Meiwes, known as "the Rotenburg Cannibal", who killed and ate a voluntary victim (Bernd Jürgen Armando Brande) whom he met on the Internet in 2001.

Cannibal is available in three different limited collector's editions: the "Golden Edition", the "Ultralimited Edition" and the "Standard Edition".

The "Golden Edition" (Bookbox + Slipcase + DVD + Poster + Deluxe Golden Card) is limited to just ten copies, each individually hand numbered and each disc has it's own design too. The "Ultralimited Edition" (Bookbox + Slipcase + numbered DVD + Poster + Card) has only twenty copies and the "Standard Edition" (DVDpack 10mm. DVD + Slipcase + Card) has three hundred copies. Unfortunately the Golden Edition and the Ultralimited are already sold out but the Standard Edition is still available. 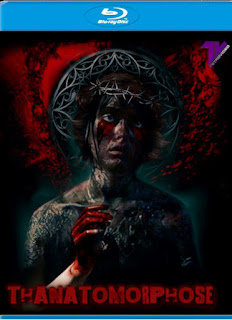 Discovering several bruises on her body after a night of rough sex, a young woman is shocked as, rather than heal itself, her body begins rotting from the inside out.

She faces a terrifying and gory descent into a living death, as her putrefying body begins to fall off the bone.

Produced, written and directed by Éric Falardeau in 2012, the movie is structured in three acts representing the stages of the physical and psychological deterioration of a girl (Kayden Rose).

The practical effects are by David Scherer (Horsehead, Blattaria, The Barn) and the artwork is by Shin Nagai.

For more info and to order direct, visit.. https://tetrovideo.com/