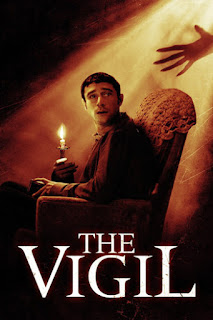 Following its successful theatrical release, audiences who missed THE VIGIL in cinemas will have the chance to be spooked by the supernatural Blumhouse horror when it’s released on digital platforms later this month in the UK and Ireland, and on DVD January 2021.

Set over the course of a long, dark night in Brooklyn’s Hassidic “Boro” Park neighbourhood, following Yakov (Dave Davis, True Detective), a former Hassid, who has lost his faith, and isn’t eager to go back to the insular religious community he only recently fled.

From Blumhouse (the producers of Halloween and Insidious), and described by Bloody Disgusting as “a fresh take on the religious/demon possession horror film”, THE VIGIL is the startling debut feature from Keith Thomas. With an unusual and evocative setting, it’s beautifully crafted, packed with fingernail-shredding scares (including a mysterious video message that’ll stand your hair on end), an ominous and eerie score, and features a standout performance from Davis as a man confronting evil. The words “You want some tea?” will never sound the same again.

THE VIGIL will be released on Digital Platforms from 30TH November and on DVD on the 4TH January 2021 in the UK and Ireland.