Daily death figures…people locked down, hiding, communicating via webcams…a divided nation…a right wing agenda pulling the strings of government with populist politics…welcome to alternate Detroit in 1986…welcome to the world of GOODNIGHT,  HALLOWEEN. 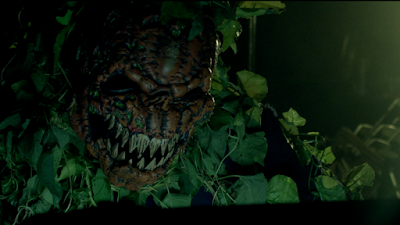 GOODNIGHT,  HALLOWEEN is a short fantasy thriller from award winning writer/ director Luther Bhogal-Jones – in this alternate world Halloween creatures have co-existed with mankind for all time…but now a forced government policy has removed their rights and allowed human citizens to exterminate them without consequence. The creatures have been forced into hiding and forged uneasy alliances between competing different species, all with their own agendas. A ray of hope emerges – evidence that could discredit K.R.O.N.A – the Khristian Right Of New Amerika – and having retrieved the evidence a group of creatures are scattered and forced to stay in hiding while the evidence is painstakingly uploaded to the Network…if they can stay alive long enough…which is where the film begins…

Ironically prescient for these times after being 14 years in the making (don’t ask, or refer to the accompanying 10 FAQs for more information on that) Goodnight, Halloween is a thrilling stylish throwback to the creature films of the VHS 80s era – something that could have come from studio stables of New World or Empire Pictures – while combining elements of Robocop’s mediabreak interludes and downbeat, cynical elements of John Carpenter’s work (especially with the Carpenter-esque score to the film – courtesy of Worthing composer Monzen Nakacho)

GOODNIGHT,  HALLOWEEN is available to view now at https://youtu.be/_j92cxEB39o

For more info on this and other features by Faster Productions, visit their Facebook Page.