Campaign for VR Horror "WE ARE OMEGA" Launched. 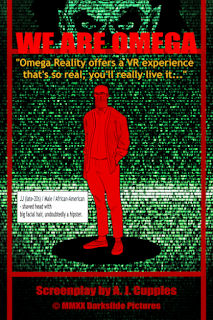 British screenwriter A.J. Cupples and Canadian director Brendan Petersen have teamed up to work on psychological horror, WE ARE OMEGA.

Synopsis
A man named JJ drops $5000 to take his old friend Molly on a VR date. Think CABIN IN THE WOODS meets an episode of BLACK MIRROR.

Unlike the VR you are used to, Omega Reality offers an experience which requires no headset.

Once they enter the virtual world, they traverse to crazy new places through portals as they encounter nightmarish creatures, a sadistic clown named Gropey, a raving masked slasher with a neon flail named Bootleg, and more!

What is virtual and what is reality starts to blur, as they start to wonder if they will ever be able to escape. . .

The Indiegogo campaign for this feature film is live, and we’re reaching for £15,000 (19.4 USD/25.8 CAD) to give JJ and Molly’s hellish story its proper justice... from visual FX of the nightmarish creatures to the high-tech portals operated by Omega.

Darkslide Pictures has experience in creating quality films and are calling all horror lovers to support and give an outlet for independent artists to make honest and profound feature films which don’t come from Hollywood’s cookie-cutter.

Our leads for the project are Beáta Imre and Honnor T. Seaton - our cast and crew are tight-knit and diverse... since the screenplays initial journey across the Atlantic, it has reached the cold climates of Thunder Bay, Ontario and found its way to the plains of the peach state, Georgia.

Every eye that falls on our campaign helps tremendously, and for that, we’re offering our backers amazing perks in return!

For more info and to get involved visit the films Indiegogo page.