Arrow Video’s February films include Doctor Herbert West behind bars, an extraordinary and unmissable shock rock doc, a duo of demonic horror favourites produced by horror maestro Dario Argento in dazzling UHD, and a dark and disturbing gem from Japan.

BEYOND RE-ANIMATOR - On Blu-ray 1st Feb 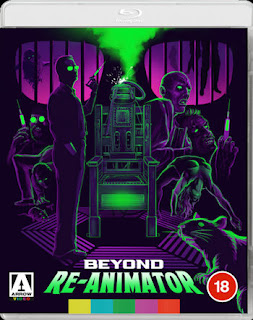 Finally being held accountable for his catastrophic experiments in re-animating the dead, Dr Herbert West (Combs) finds himself incarcerated at a maximum-security penitentiary.

With the arrival of a new prison doctor who happens to be an enthusiastic student of West’s work, the medical deviant is afforded the opportunity to resume his grisly studies - this time on his fellow inmates, with predictably hair-raising results.

• High Definition Blu-ray (1080p) presentation
• Original DTS-HD MA 5.1 and 2.0 audio options
• Optional English subtitles for the deaf and hard of hearing
• Audio commentary by director Brian Yuzna
• Isolated score track featuring an interview with composer Xavier Capellas
• Beyond & Back, an interview from 2018 with Yuzna
• Death Row Side Show, an interview from 2018 with Jeffrey Combs
• Six Shots by Midnight, an interview with S.T. Toshi, author of I Am Providence: The Life and Times of H.P. Lovecraft
• All in the Head: Brian Yuzna on the Re-Animator Chronicles, an archive interview with the director looking back at the franchise
• In Prison with the Dead, an on-set documentary made by Yazid Benfeghoul for his Gore News fanzine, featuring interviews with Yuzna, Screaming Mad George and others
• Production Art Gallery by illustrator Richard Raaphorst
• Electronic press kit featurette, plus interviews with Yuzna and the cast, and behind-the-scenes footage
• Press conference footage, featuring Yuzna and the cast
• Interviews filmed at the Sitges Film Festival in 2002
• Music video for “Move Your Dead Bones” by Dr. Reanimator
• Alternate opening credits
• Theatrical trailers
• Image gallery
• Reversible sleeve featuring new and original artwork by Gary Pullin 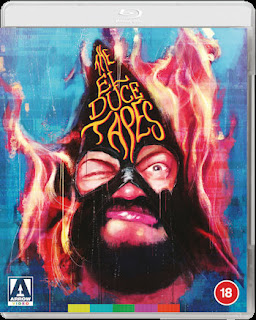 In the early 90s, aspiring filmmaker (and General Hospital co-star) Ryan Sexton lugged a giant camcorder into some of the seediest clubs and the filthiest apartments in Hollywood. There he filmed hour upon hour of VHS footage of the jaw-droppingly offensive Shock Rock band The Mentors, focusing on their infamous lead singer, “El Duce.”

30 years later, the team behind The Nightmare and Room 237 and the editor of Leap of Faith: William Friedkin on The Exorcist, uncover this dusty stockpile of long forgotten – and unseen – footage. They begin to piece together a picture of the man under the black executioner’s hood and what his wilfully offensive act and controversial views might tell us about 21st century America.

An Incendiary, tragicomic documentary (midway between The Decline of Western Civilization and Crumb) which has been hailed as “Essential Viewing” by CineVue and called “Dark and Irresistible” by director John Carpenter, The El Duce Tapes will chew you up, spit you out, and leave you floored.
LIMITED EDITION CONTENTS 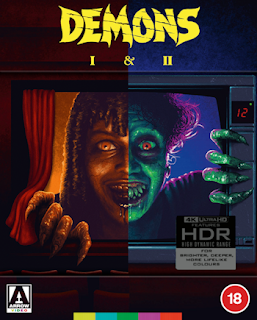 In the early 1980s, Dario Argento, the famed horror maestro responsible for such classics as Suspiria and Deep Red, branched out from directing into producing, shepherding the work of his fellow filmmakers to the screen – among them Lamberto Bava (Delirium, A Blade in the Dark), son of the legendary Mario Bava. Together, they crafted two tales of terror that would become synonymous with Italian 80s horror, in which the veil between the real world and the silver screen is torn asunder.

In 1985’s Demons, a motley assortment of unwitting filmgoers accept invitations to a screening at the mysterious Metropol theatre. However, as the brutal slasher film unspools, the horror breaks free from the constraints of the screen, unleashing a swarm of slathering demons, intent on spreading their evil plague across the globe.

Then, in 1986’s Demons 2, Hell comes direct to the living room as bloodthirsty demons descend on a luxury apartment block, devouring the residents and propagating their deadly plague.

Arrow Video is proud to present brand new 4K restorations of both classic films, more vivid and terrifying than ever before, alongside a wealth of bonus features old and new, making this the ultimate experience in celluloid terror. 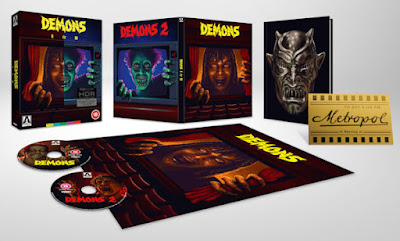 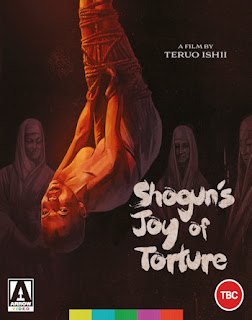 The first tale sees the beautiful Mitsu (Masumi Tachibana) going to horrifying lengths to tend to her older brother Shinzō (Teruo Yoshida), a carpenter injured in a work accident, but the law catches up on them and metes out a terrifying retribution after they violate the ultimate taboo.

In the second, unfettered passions in a Buddhist nunnery are not allowed to go unpunished after abbess Reihō (Yukie Kagawa) and her attendant Rintoku (Naomi Shiraishi) encounter a virile young monk from a neighbouring temple.

In the closing segment, a sadistic torturer (Fumio Watanabe) attempts to show a tattoo artist (Asao Koike) how to depict convincing expressions of faces of pain in his work by allowing him to sketch a selection of Europeans as they are tortured for entering Japan with the aim of spreading Christianity.

Ishii’s notorious portmanteau of Edo-era excess signalled a change in direction for a director until then regarded for his crime and yakuza films, setting the ball rolling on the run of grotesque historical anthologies for which he is now best remembered. Vehemently denounced by the critics of the day, Shogun’s Joy of Torture set a new benchmark for the depiction of sex, sadism and depravity in Japanese exploitation, with Ishii staging his elaborate torture methods with an unmatched verve and inventiveness.