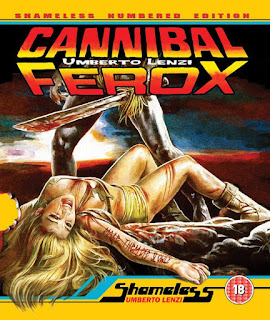 Nearly a decade after initiating the genre with Man From Deep River, director Umberto Lenzi gives the final word on the Italian gut-muncher with his ferocious flesh-feasting masterpiece Cannibal Ferox.

To lay to rest the ‘myth’ of tribal cannibalism, PhD student Gloria (Lorraine De Selle - House by the Edge of the Park) journeys to the Amazon jungle but things soon go awry when her party encounters sadistic cocaine cowboy Mike (Giovanni Lombardo Radice - City of the Living Dead, Cannibal Apocalypse). Mike is on the run from the hungry locals but all is not what it seems - as the travellers venture into the heart of darkness, they soon discover what it means to be hunted.

Sink your teeth into one of Italian cinema’s most shocking and controversial films, making its UK Blu-ray debut with this tantalising new edition from Shameless.
*Special features*
- UK Blu-ray debut
- Limited numbered edition
- A Taste of the Jungle: an interview with director Umberto Lenzi
- Hell in the Jungle: an interview with Giovanni Lombardo Radice
- Restoration Process for Cannibal Ferox
- Cannibal and Carpet Fitters - a short film from 2015
- Lenzi Photo Gallery

(Note - this release has had 1m:55s cut to remove scenes of animal cruelty)