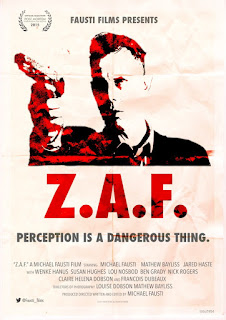 Indie film makers Fausti Films recently got in touch to tell us about their debut short film "Z.A.F", which they completed earlier this year and is currently being submitted to the various festival circuits.
From the press release...
Commander Olson, tormented by the demons of his military past, is the sole witness to an apparently motiveless suicide. The resulting insomnia adds to the Commander’s already increasing sense of paranoia. Olson is forced to accept treatment from a mysterious civilian doctor named Gottlieb.
However, Olson is unaware that his treatment is being overseen by a shadowy figure known only as “Helms” and his hold on reality is soon to be shattered, resulting in a shocking and violent confrontation.
Z.A.F. is the debut film from writer and director Michael Fausti. It is a back to basics film, shot entirely on a consumer camcorder. This horror-noir is set to become a Lo-Fi classic.
You can view the trailer below...
The film had it's premiere at Mexico’s "Post Mortem International Horror & Bizarre Film Festival" in October and should hopefully be featuring at other festivals shortly.