Coming to UK and Irish cinemas this May, comes Star Trek's Patrick Stewart and Anton Yelchin like you've never seen them before. 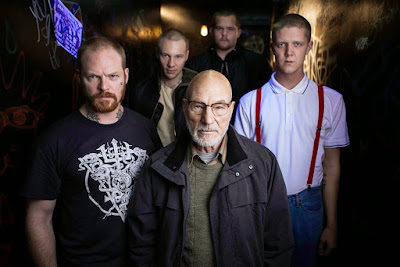 Down-on-their-luck punk rockers The Ain’t Rights agree to a last-minute gig in a backwoods Oregon roadhouse only to find themselves caught in the crosshairs of a violent white-supremacist gang.

After finishing their set in the no-name skinhead club, the band members stumble upon a grisly murder scene and are targeted by a ruthless club owner and his henchmen, determined to eliminate all witnesses. Hopelessly outmanned and outgunned, the terrified musicians barricade themselves backstage to buy time for an escape attempt. As a heavily armed militia mounts a deadly assault, the survivors pull together in a last-ditch effort, surprising their opponents with unexpected ingenuity and courage.

Writer and director Jeremy Saulnier (BLUE RUIN) says, "GREEN ROOM was designed to deliver the most intense cinematic experience I could conjure up.  There is no better way to see it than in a crowded cinema and there is no better team than Altitude & Picturehouse to bring it to UK and Irish audiences in May. The reception to the film thus far has been beyond my wildest dreams and I’m looking forward to delivering more cinemagoers their wildest nightmares!"