BBCs "And Then There Were None" comes to UK DVD Jan 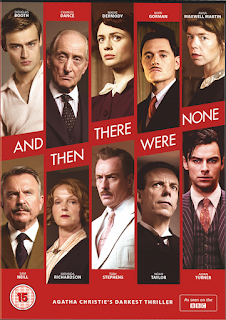 To celebrate Agatha Christie’s 125th Anniversary, the BBC brings her hugely acclaimed book and one of the best-selling crime novels of all time to life in thrilling murder mystery drama, "And Then There Were None" (AKA "Ten Little Indians").

Featuring a stunning all-star cast, it makes its DVD debut on 11 January 2016 from RLJ Entertainment’s Acorn label following its broadcast on BBC One over the Christmas holidays.

Set in 1939 this exciting, powerful three-part series follows ten strangers with dubious pasts who are drawn to a mysterious mansion on a remote island off the Devon coast. As the weather turns, they find themselves stranded and their hosts mysteriously absent. They soon discover they are each accused of a terrible crime for which a price must now be paid.

When members of the party start to mysteriously die; brutally slaughtered one by one, the ill-fated guests realise they may be harbouring the murderer among them. For if all are destined to die, who can their executioner be?

Who will survive and who is the killer? It’s time to find out in "And Then There Were None".