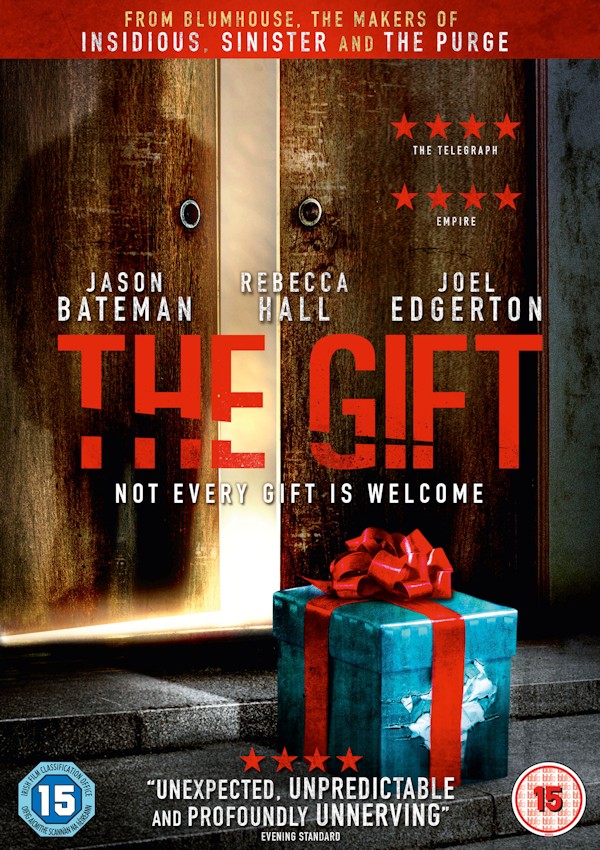 There’s problems in store for Jason Bateman this month in Joel Edgerton’s “The Gift”, which is out now on UK VOD and comes to UK disc 7th Dec from Lionsgate.
Young couple Simon and Robyn (Jason Bateman and Rebecca Hall) are moving back to their old home town, when Simon bumps into an old acquaintance from his school years named Gordo (played by director Joel Edgerton). Trying to be polite, he suggests he pop round to visit them sometime, but is surprised when he actually takes him up on his offer.
Its obvious Simon isn’t too keen on him, but his wife Robyn thinks he’s a nice guy, who’s just a little lonely. However, when Gordo keeps dropping by unannounced, sending unsolicited gifts and inviting himself round for dinner, he decides he’s had enough and essentially tells him to get lost.
This is when things take a sinister twist, as someone then poisons their fish, their dog goes missing and they start to receive mysterious notes. However, despite Gordo acting like an obsessive stalker, it turns there’s a bit of history between him and Simon, which Robyn doesn’t know about, and all is not what it seems between the two of them…
The gift marks the directorial debut of Joel Edgerton (actor Black Mass, Zero Dark Thirty), who also wrote the script and appears in front of the camera as the socially inept Gordo and is an extremely engaging, not to mention dark and disturbing film.
I was actually pleasantly surprised by this, as the story provided a few interesting twists and doesn’t go down the road you think it’s going to. Asking the question, what kind of person were you in school and what kind person are you now. Giving adage to the old saying that karma can be a right bitch.
The disc comes with a number of special features

First up, Karma for bullies (1.54) and The Darker side of Jason Bateman (1:05), which look like they were originally filmed as web promos, in which Writer/Director Joel Edgerton and star Jason Bateman discuss the films concept.
You also get 4x deleted scenes, and the Blu-Ray release also contains an alternate ending, which are introduced by the director.

"The Gift" is available to view online from all good Digital outlets, and is released to UK BD and DVD Dec 7. View the trailer on YouTube