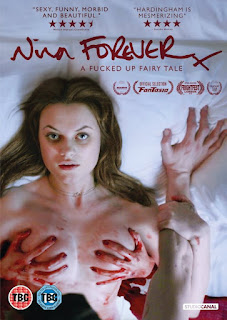 We all know that two’s company, three’s a... bloody mess! No more so than in Nina Forever, the strikingly original award- winning British debut that delivers an extraordinary take on a love triangle.
Rob (Cian Barry) is a supermarket shelf-filler who tried to kill himself after depression brought on by the sudden tragic death of his girlfriend Nina (Fiona O’Shaughnessy). Checkout girl Holly (Abigail Hardingham) has a morbid fascination with pain and death and puts Rob on her want list. Sexual sparks fly when they do finally get together. There’s just one problem. Even though she’s dead, sarcastic Nina has no intention of letting go of her ex. But can Rob and Holly really cope with a forever revenant threesome? A tender but bloody story about breaking up and moving on.

As with any relationship, be prepared to encounter all the butterflies, all the sex, all the heartbreak, all the turmoil... and all the blood! Nina Forever is unlike any romance we’ve cried to, unlike any horror we’ve grossed ourselves out with and unlike any British debut we’ve discovered in years. A truly groundbreaking black comedy from the Blaine brothers which isn’t afraid to break the rules (and a few bones along the way). This is a harrowing take on the complexities of human sexuality and the emotional chaos that comes with it. A tender, charming, quirky yet emotionally poignant tale of modern love through a horror lens

Nina Forever is the talk of the international film festival circuit receiving both critical and audience praise at SXSW Film Festival 2015, Film4 Frightfest 2015, and Toronto After Dark Film Festival 2015 to name a few. It’s a modern cult classic in the making and firmly places directors Ben and Chris Blaine alongside pioneering British filmmakers Ben Wheatley and Peter Strickland.
Nina Forever is a fairy tale unlike no other, with a very real emotional core, incredibly engrossing performances and an endless supply of bed sheets.
Special Features:
A Look Behind Nina Forever
Things That Are Not There
Things That Were Not There
I happened to see this at the Mayhem Horror Festival in Nottingham and believe me, it certainly lives up to it's tag line "A Fucked up Fairy Tale".
The film is released to Digital Download in the UK 15th Feb, with a DVD and BD release following 22nd Feb.
Pre-order the UK DVD from Amazon.co.uk
.