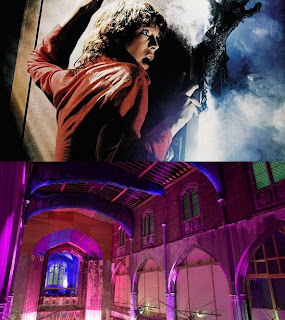 To celebrate Death Waltz Recording Company’s limited edition double LP release of the soundtrack for John Carpenter’s horror classic, "THE FOG", with exclusive artwork by leading British artist Dinos Chapman. Cigarette Burns Cinema and Dealth Waltz are proud to present an exclusive screening of the film on Friday 7th June in London.
For one night only Cigarette Burns and Death Waltz will take over the Nave, an old deconsecrated church in Islington which is now a licensed arts and performance space, and transform it into a hall of cinematic worship, providing a suitably atmospheric backdrop for a unique film presentation of John Carpenter’s 1980 chiller, screening from a rare original 16mm full scope print, with full exclusive trailer programme support and the evening’s music soundtrack provided by KAB radio.
After the screening Death Waltz will unveil Dinos Chapman’s original artwork for the album cover; his own interpretation of the film. Attendees will be the first people to see this specially commissioned work and will have the chance to purchase the limited edition double LP set before it goes on general sale the following week.
THE FOG screens on Friday 7th June, Doors open 7pm, screening starts 7:45pm at the Nave, 1 St Paul’s Road, London N1 2QN.


Tickets available through We Got Tickets, £12, on sale from 9am, Monday 15th April.http://www.wegottickets.com/event/218190
THE FOG Death Waltz Limited edition double vinyl album with all new and exclusive artwork by Dinos Chapman is a strictly limited edition of only 700 copies. Each 180gm record will be on coloured vinyl (blue/clear & green/clear) and housed in a old style heavy casebound sleeve sealed inside an oversized silkscreened plastic overbag with a print of the Chapman cover image. RRP £25.00
Posted by Dark Angel at 07:57