Studiocanal have just released the new poster for their upcoming Vampire film "Byzantium", from Neil Jordan (Interview with the Vampire) and starring Gemma Arterton (Hansel and Gretal/Casino Royale) and Saoirse Ronan (Hanna).
Not sure if the quotes on the poster saying "Best vampire film since Let the Right One In" and "Twilight for Grown Ups" is such a ringing endorsement though.
Anyway, the film is out at UK cinemas May 31. 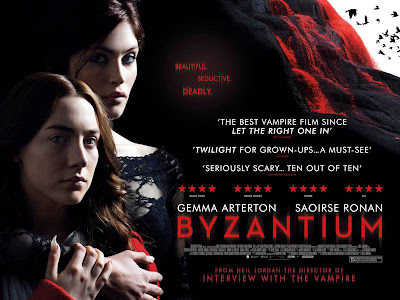 View the trailer on YouTube.
Posted by Dark Angel at 15:54