Bait 3D comes to the UK 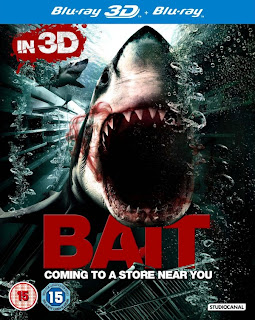 Aussie shark horror, "Bait" is released to 3D Blu-Ray and 2D DVD in the UK April 29th.
A tsunami devastates a small Gold Coast town and leaves twelve people trapped in a flooded supermarket. Amidst the horror the group slowly realises that they may not be alone. Trapped with a hungry Great White shark, how many of them will have to die and will rescue ever come?

BAIT 3D is the first ever Australian 3D production and co-production between Australia and Singapore.
Both discs contain a making of feature and trailer as extras.
View the trailer on YouTube.
Buy the 3D BD on Amazon.co.uk
Buy the 2D DVD on Amazon.co.uk
Posted by Dark Angel at 19:11