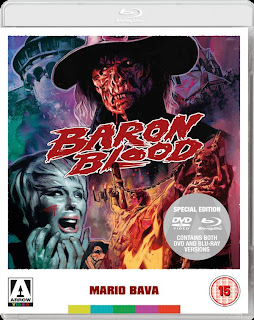 Mario Bava’s “Baron Blood” is out on a dual-edition Blu-Ray and combo pack in the UK this Monday (Apr 29), having been given the deluxe treatment by genre specialists “Arrow films” who (as always) were kind enough to send me a review disc to take a look at.

Set in , an American tourist, Peter Kleist (Antonio Cantafora – “Demons 2”), has arrived to visit an old castle where one of his ancestors, the notorious Baron Otto Von Kleist, once lived.

Von Kleist was infamous for torturing and killing hapless locals just for fun, which earned him the nickname Baron Blood and eventually saw him being executed for.

But when Peter gets his hands on an old parchment containing various black magic incantations on, which claims can resurrect the old Baron, curiosity gets the better of him and so he, with the help of a local historian Eva (Elke Sommer, who also starred in Bava’s “Lisa and the Devil”) decides to try it out to see of it works...

It goes without saying that such things are never wise to try out in a horror film, and fairly soon the castles old torture chamber is being pressed back into service as the Baron duly reappears and horribly mutilated bodies start piling up all over the place.

Also starring Joseph Cotton, who had previously starred in such classics as “Citizen Kane” and “The Third Man”, but had since taken to horror B movies to make ends meet, “Baron Blood” was essentially an early slasher movie, but done in Bava’s own inimitable style of gothic horror, throwing elements of witchcraft and the supernatural into the mix.


As per the usual, Arrow have included a bumper selection of extras to go with this release. These include…

- 3x different audio options. Watch the film in either the dubbed English European version, the original Italian language version with optional English subs, or the alternate US English dubbed version, which uses a different musical score (the Italian option also displays the Italian version of the opening and end credits).
- Audio commentary track with Bava biographer Tim Lucas
- Special Introduction by author and horror expert Alan Jones
- Delerium Italian Style feature. Interview with fellow director Ruggerro Deodato about the golden age of Italian cinema, how Bava influenced him and his collaborations with Bava’s son Lamberto.
- 2x theatrical trailers
- Radio spots
- Bava at Work gallery, which is essentially a photo gallery of behind the scenes stills of Mario Bava on various films.

The release also comes with a booklet on the film, which can be found inside the case, and reversible sleeve artwork.

Now this review was for the Blu-Ray disc, but the included in the pack, apparently has the same extras on (so I’m told).

Definitely a must have for Bava fans, the discs are available to buy from Monday 29th April.