Swedish horror "Mara" coming to DVD in the US and Sweden. 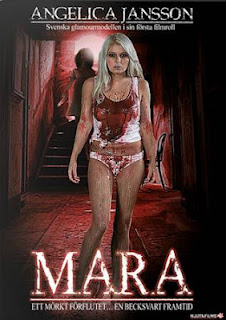 Filmkoncept Scandinavia is proud to announce that the Swedish horror-thriller "Mara" will premiere on DVD and VOD in Sweden from Njutafilms on January 16. Among the bonus features on the domestic release are a Making Of featurette and interviews with star Angelica Jansson.
The film will then be released in the U.S. and Canada during spring 2013, distributed by MVD Entertainment Group.The material from the Swedish release is expected to be ported over for the US release.
Making her feature film acting debut, popular Swedish Glamour model Angelica Jansson stars as Jenny, who as a young girl witnessed a brutal, gruesome murder by an insane woman. A violent act that has forever scarred her.

Deciding to confront her past, Jenny, who's now an adult, returns to the scene where the murder was committed: a picturesque but secluded house in the woods, along with some friends.

But what was supposed to be a relaxing weekend in the countryside becomes a blood-soaked nightmare when it turns out that the group aren't alone...

Nothing is as it seems in the psychological horror-thriller "Mara", the first production from Filmkoncept Scandinavia. The film was written, produced and directed by Fredrik Hedberg, Ake Gustafsson and Jacob Kondrup; the founders of Filmkoncept Scandinavia.
"Mara" uses a deliberately slow building style and plot twists, were nothing is what it seems, is partly inspired by Alfred Hitchcock's "Psycho". Hitchcock aside, the gloomy feel and moody look of the film draws on more contemporary inspiration from the likes of John Carpenter and others. The movie was shot on location near Kristianstad, southern Sweden.
View the trailer on YouTube.
Visit the official Facebook page.
The film will be available to pre-order shortly.