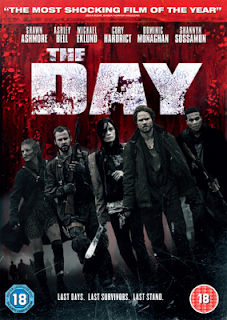 Recently had the opportunity to see the new post-apocalyptic/survival horror "The Day", which is coming out on UK DVD later this month from eOne films.
Set a few years after some unspecified apocalyptic catastrophe. A small band of survivors, who are on the road looking for a safe haven, hold up inside a disused farmhouse to shelter from an upcoming storm.

One of them, a loner named Mary, seems to know a bit more about the place than she's letting on and is quite insistent that they press on as quickly as possible. But when one of them is taken ill, they are forced to stay the night. Unfortunately, they find the place is actually a trap, looking to snare unwary passers by, and fairly soon they find themselves trying to fend off a large scale attack by a group of blood thirsty marauders, who have them in mind for their next meal.

Kind of "The Road" meets "Assault on Precinct 13" with a bit of "Mad Max" thrown in, I found this to be quite entertaining. It starts off a bit slow to begin with, being more of a post-apocalyptic melodrama, but when the fighting between the group and the survivalists kicks off towards the end, everything moves up a gear and it becomes more of an action film. If you like these post-apoc/survival horrors you should enjoy it.
The film hits UK DVD December 27th, perfect for those in need of some post Xmas horror. No word on what extras will be included on the disc though, if any.

View the trailer on You Tube
Pre-order the DVD from Amazon.co.uk