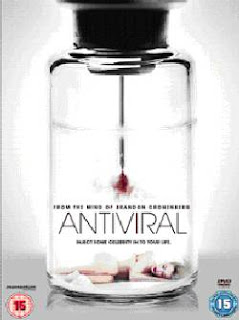 Inject some celebrity into your life and take a magnified look at our public obsession with celebrity culture when ANTIVIRAL is released in the UK this coming February.

Syd March (Landry Jones) is an employee at The Lucas Clinic – a company that sells injections of live viruses harvested from sick celebrities to fans who wish to fulfil their obsessive desire for real intimacy with their idols.

As well as working for them, Syd also supplements his income by smuggling viruses out of the clinic in his own body in order to sell them on the black market. Constantly ill and losing his edge, Syd becomes careless and infects himself with an unusual virus carried by superstar Hannah Geist (Gadon).

When the news breaks that Hannah has died, Syd realises that the virus running rampant in his system will soon kill him too. Hallucinating and struggling to remain in control, Syd must race to solve the mystery surrounding Hannah’s death if he has any hopes to avoid suffering the same fate.

ANTIVIRAL is released at select cinemas on 8 February and on DVD and digital download from 11 February 2013 courtesy of Momentun Pictures.