The Eschatrilogy - A Film Review! 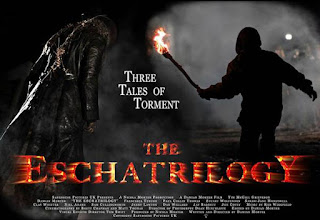 Earlier this year whilst attending the “Day of the Undead” festival in Leicester, I caught a screening of Damien Mortar’s indie zombie film “The Eschatrilogy”. Having given the film an overall favourable review in my Festival report video (which you can see HERE), I was subsequently contacted by the director who was kind enough to send me a screener copy to review.
The movie is essentially an anthology film, about 3 separate tales which take place during a zombie outbreak. It starts with a lone survivor at some make-shift survivalist camp, who comes across a mysterious stranger that has collapsed at the front gate. Taking him inside, he discovers the stranger’s journal, which documents the many horrors he has seen during the ensuing Zombie apocalypse.
As he reads from it, we are treated to a series of 3 tales, which are all connected by the films central theme. The first, entitled “Dead Inside” which shows the start of the outbreak, deals with a young mother and her daughter battling to keep her recently zombiefied husband out of the family home.
The second, “Dying Breed”, which takes place the following day with the outbreak in full swing, follows a young lad named Alex who has to fight his way cross country as he tries to make it to his parents house, to see if they’re OK. Whilst the final film, “Father for the Dead”, which seems to be set several days after, shows just how far a parent will go to protect their child from harm, whether it be from the walking dead, or other groups of marauding survivors.
Filmed in and around the suburbs of Sheffield and Barnsley on a budget of £5000 (according to the IMDB), and made up of predominantly first-time actors, when I first came to view this I wasn’t too sure whether I would like it. But as the film got going I was actually pleasantly surprised.
The anthology style of the film was rather reminiscent of those old Amicus films from the 60’s and 70s, but updated to a modern day setting. Indeed the director admitted that “Tales from the Crypt” was an influence during production.
Now obviously, the film is very low budget, so its no “Dawn of the Dead” to be sure, but for what it is, I felt that it was rather good. It was competently shot, there was some nice gore in it and was quite impressed how the director managed to pull off the scenes with the desolate housing estates given its budget.
OK, so some of the acting and zombie make up was a little bit ropey in places. The survivalist camp looked like it was filmed at a paintball centre (IT WAS), the demon character at the start, kinda looked like one of Rob Zombies stage costumes and the audience seemed to find some scenes inappropriately funny.
But bearing in mind the films low budget nature, you can’t compare this to a mainstream Hollywood film and there are films out there with much larger budgets which aren’t even half as good (the god awful Zombie Diaries springing immediately to mind).
So overall, I found this to be quite an enjoyable low budget movie, which zombie film fans should find entertaining. Damien Morter also directed the 2011 film “Bicycle Day”, so if you’re familiar with that, you might want to check this one out too.
The film is currently doing the rounds at various film festivals, and the producers are hoping to secure a distribution deal in the new year.

For more info, checkout the film makers website at http://www.safehousepicturesuk.com/