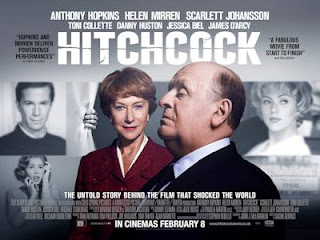 Coming to UK cinemas in February, HITCHCOCK is a love story about one of the most influential filmmakers of the last century, Alfred Hitchcock, and his wife and partner Alma Reville. The film takes place during the making of Hitchcock's seminal movie PSYCHO.

Directed by Sacha Gervasi (The Story of Anvil), HITCHCOCK stars Academy Award winner Anthony Hopkins (The Silence of the Lambs) as Alfred Hitchcock, Helen Mirren (TVs Prime Suspect) as Alma Reville and Scarlett Johansson (Avengers Assemble) as Janet Leigh.
The cast also includes: James D'Arcy (Cloud Atlas) as Anthony Perkins, Jessica Biel (Total Recall) as Vera Miles, Toni Collette (The Hours) as Peggy Robertson and Danny Huston (The Constant Gardener) as Whitfield Cook. The film is based on the book ‘Alfred Hitchcock and the Making of Psycho' by Stephen Rebello.
HITCHCOCK will open in the UK and Ireland on 8 February 2013, distributed by Fox Searchlight.