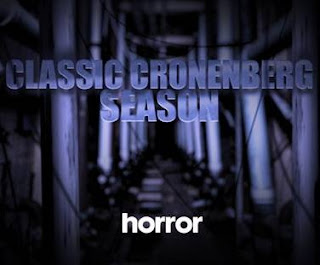 This January, The Horror Channel will be showcasing three of David Cronenberg’s most defining films with a season that can’t fail to shock and awaken the senses. SHIVERS, RABID and THE DEAD ZONE all receive their Horror Channel premieres, exclusively introduced by top horror directors Simon Rumley (Red White & Blue), Sean Hogan (The Devil’s Playground) and Pascal Laugier (Martyrs).
Sat Jan 12 @ 22:55
The season kicks off with the premiere of SHIVERS (1975), Cronenberg’s debut full-length feature that helped coined the phrase ‘Body Horror’. The infectious plot sees a parasite enter the bodies of people living in a Montreal apartment block and consequently turns them into libido driven, sex mad zombies. Clearly a fan of the genre, Cronenberg cast the unforgettable Hammer Horror siren Barbara Steele in what was to become one of the most iconic scenes in the film.
Sat Jan 19 @ 22.55
Next up is the premiere of RABID (1977) in which Cronenberg is once again flirting with the themes of strange science and even stranger sex in this blood-lusty follow up to Shivers. This time a young woman becomes a test subject for an experimental skin graft when she survives a horrific motorbike crash – but her new skin demands feeding…Starring Marilyn Chambers, this is Cronenberg’s twisted take on the Vampire genre.
Sat Jan 26 @ 22.55
Last in the season is THE DEAD ZONE (1983), in which Cronenberg teamed up with Stephen King when he adapted his novel THE DEAD ZONE. Filmed during a relentless deep freeze in Southern Ontario, this horror thriller stars Christopher Walken. As Johnny Smith – a man who wakes from a coma to find he’s lost five years of his life but gained psychic powers to foresee the future – something of a gift that soon becomes a curse.
The Horror Channel is available on Sky 319 / Virgin 149 / Freesat 138
For more info visit...
http://www.horrorchannel.co.uk
http://www.twitter.com/horror_channel
http://www.facebook.com/horrorchannel