Winter Chills on the Horror Channel. 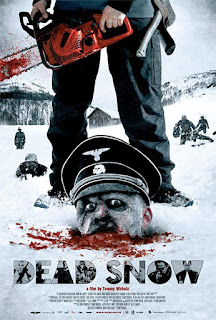 If you're yearning for some post-Halloween horrors, the Horror Channel (UK) are showing a season of "Winter Chills" this November, featuring some truly snow filled spine-tingling premieres.
The season kicks off Nov 9th. With DEAD SNOW, in which the hills are alive – with undead Nazis in this beautifully nasty horror comedy by director Tommy Wirkola (Hansel & Gretel: Witch Hunters). Which sees eight medical students head out on their vacation, only to realise they came to the wrong resort, as deep in the hills lay an unthinkable evil.
The season continues with BLOOD RUNS COLD on November 10th. Swedish director Sonny Laguna gives the slasher genre a welcome Scandinavian make-over. Record-producer Winona heads to her hometown on the outskirts of Stockholm for a break... Shortly after settling in, she invites a former boyfriend and a couple to the house. But there is an unknown presence stirring within the house, one that has been waiting for the right moment to strike.
Wrapping up the season is sci-fi horror thriller THE THAW (2009) Directed by Mark A Lewis, it stars Val Kilmer as Dr. Krupien the head of a team of ecology students, who are examining a melting ice cap in the Arctic.  When Krupien unearths a prehistoric specimen the likes of which has never been seen, he summons four of his brightest students to take part in the excavation. But the melting polar ice-cap has released a deadly pre-historic parasite.

For more info on these, and the other films on The Horror Channel, visit the official website at http://www.horrorchannel.co.uk
Also on Twitter http://www.twitter.com/horror_channel
and on Facebook http://www.facebook.com/horrorchannel