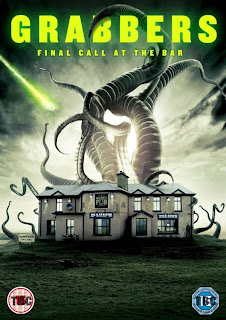 The blood-curdling, booze-soaked horror comedy GRABBERS invades UK cinemas on December 26, courtesy of Vertigo Films.
The sleepy coastal community of Erin Island is about to receive some unexpected visitors. Vicious extra terrestrial predators have landed and they’ve got a thirst on.... for blood. With razor sharp tentacles and an insatiable hunger, the alien creatures are about to indulge in a feeding frenzy the likes of which has never been seen before.
With a storm fast approaching and with no means of escape, it’s down to the charming but heavy-drinking Policeman Ciarán O'Shea (Richard Coyle - Pusher) and his enthusiastic new recruit, Garda Lisa Nolan, (Ruth Bradley - TV’s Primeval) to rally the villagers, arm the troops…and head to the pub.
Will the locals find enough Dutch courage to survive The Grabbers? Find out Dec 26th.
Following its thetrical run, the film will be then be released to UK DVD and Blu-Ray on the 31st.
Pre-order the UK DVD at Amazon.co.uk.
Pre-order the UK Blu-Ray at Amazon.co.uk.