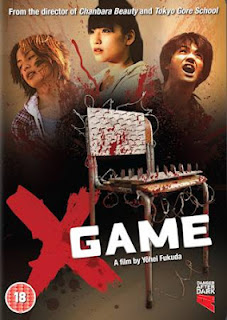 Danger After Dark recently sent me a copy of their new release "X-Game" to take a look at which is out later this month.
The film centres around Japanese teenager Hideaki Kokubo, who finds a DVD with an X on the cover. Playing the disc in his machine, the film appears to be some sort of low budget horror film, showing a man being tortured.
But the methods in which he's being brutalised brings back some disturbing memories of his school days, in which one of the girls in his class was routinely harrased and forced to play a violent "punishment game".
Shortly afterwards, Hideaki finds himself being kidnapped by a mysterious hooded figure and subsequently held in a room resembling his former school room, along with several of his old classmates. Where they are forced to play a more violent version of the game by more of the mysterious hooded figures.
The film is in Japanese with English subs, and was in many ways reminiscent of the original "Saw" film (before they became those overly bloody torture-porn style films as the series went on). It was by director Yohei Fukuda, who also gave us the infamous "Grotesque", and is quite bloody in places, though also manages to be quite funny at times.
Those with a warped sense of humour will defineitely enjoy this.
No news of what extras will be on the disc (if any).

Buy the DVD at Amazon.co.uk
Posted by Dark Angel at 16:37