Visit "The House at the End of the Street" this January on DVD and BD. 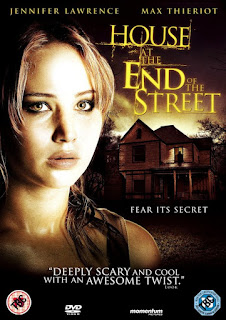 Terror will hit home and have you running scared when the chilling HOUSE AT THE END OF THE STREET is released on Blu-ray, DVD and digital download this January.
Academy Award nominee Jennifer Lawrence (Silver Linings Playbook, The Hunger Games) stars alongside Elisabeth Shue (Piranha 3D, Back To The Future) in this edge-of-your-seat horror hit packed with heart-pounding thrills and gripping suspense.
Elissa (Lawrence) and her mother (Shue) move to a new town only to find that they are living next door to a house where a young girl murdered her parents.

Locals claim that the girl mysteriously vanished after the incident, but as Elissa becomes close to the girls brother, Ryan, (Max Thieriot; Jumper, The Pacifier) she learns that a dark and terrible secret still lurks within those walls and this sinister story of murder is far from over.
Weaver (Gil Bellows; The Shawshank Redemption), a local police officer, appears to be Ryan's only supporter, but soon the trust he has in Ryan will be called into question when some strange things start happening at the HOUSE AT THE END OF THE STREET.

Directed by Mark Tonderai (Hush, Dog Eat Dog), and produced by Peter Block (Saw I- VI), this horror thriller will have you taking a closer look at your next door neighbour for weeks to come.
See if you can solve the mystery when THE HOUSE AT THE END OF THE STREET is released on Blu-ray, DVD and digital download on 28 January 2013 courtesy of Momentum Pictures.
Extras on the disc comprise of a Behind the scenes feature, which includes an Interview with Jennifer Lawrence.
Buy the DVD from Amazon.co.uk
Buy the Blu-Ray from Amazon.co.uk
For more info checkout the official UK Facebook page at http://www.facebook.com/HATESMovie
Posted by Dark Angel at 17:50