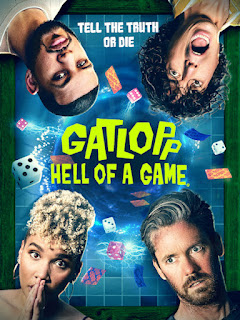 Jumanji meets Escape Room in GATLOPP : HELL OF A GAME which is oavailable now from Digital Platforms from Signature Entertainment.

It’s going to be one hell of a game, as four friends reunite for game night to forget the trauma of adult life. With mischief, booze and mayhem on the cards, are they playing the game or is the game playing them?

With their lives on the line, the group must face their inner demons by the time the sun rises or be forced to play the game for eternity.

Written by and starring Jim Mahoney (Klaus), GATLOPP : HELL OF A GAME was directed by Alberto Belli and also stars Emmy Raver-Lampman (The Umbrella Academy, Blacklight) and Jon Bass (Baywatch).