Psychological horror SHE WILL - in UK cinemas July 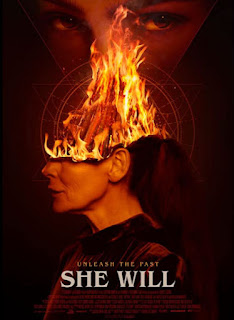 SHE WILL, the BIFA-nominated psychological horror from debut Director Charlotte Colbert, will be released to UK cinemas on 22nd July.

She discovers that the process of such surgery opens up questions about her very existence, leading her to question and confront past traumas. The two develop an unlikely bond as mysterious forces give Veronica the power to enact revenge within her dreams.

As well as directing the project, Colbert is also a co-writer on the film alongside Kitty Percy (Shakespeare & Hathaway: Private Investigators). She previously wrote and directed The Silent Man starring Simon Amstell (Grandma’s House) and Sophie Kennedy Clarke (Philomena).

Described by Academy Award-winning filmmaker Alfonso Cuaron as sitting “in the tradition of great psychological horror films”, Colbert’s profound and nightmarish vision of revenge is a “powerful debut” and centred around a mentally and physically fragile actress with an original score from Black Swan and Requiem for a Dream composer, Clint Mansell.