Key highlights this JULY on the essential, alternative streaming service ARROW include a selection of gloriously trashy films from Full Moon; the annual visit to Camp ARROW; a glut of gore and grue with a season of films from the mind of the legendary horror writer H.P. LOVECRAFT; more from the prolific Rainer Werner Fassbinder; a FULCI horror masterwork, wuxia classics and much more...
Watch the July Sizzle Reel HERE (YouTube). 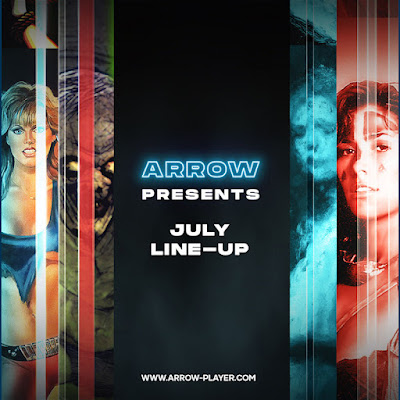 In July, a pair of fantastically-titled exploitation cult classics: SORORITY BABES IN THE SLIMEBALL BOWL-O-RAMA, David DeCoteau’s comedy horror starring scream queen Linnea Quigley (Return of the Living Dead, Night of the Demons) and a murderous imp; and CANNIBAL WOMEN IN THE AVOCADO JUNGLE OF DEATH, starring genre favourites Shannon Tweed (Cold Sweat) and Adrienne Barbeau (The Fog) as well as TV star Bill Maher, in a raucous B-movie feminist take on Raiders of the Lost Ark.

Also in July, ARROW present a pair of adaptations of H.P. Lovecraft films: in CASTLE FREAK, Re-animator and From Beyond stars Jeffrey Combs and Barbara Crampton are reunited to come face to face with terror when they travel to Italy to move into a castle they’ve inherited. - discovering it is haunted by a relentless blood-thirsty creature; LURKING FEAR is set in the town of Leffert's Corners, plagued by unearthly beings for decades. When small-time thief Blake Adams (Siren’s Kiss) turns up to claim his illicit family fortune hidden in the town cemetery and with bad guys in pursuit, getting his inheritance might be a lot more complicated.

Also in July, ARROW presents Rainer Werner Fassbinder Vol. 3, bringing together a collection of lesser-seen works from various stages in the career of the enfant terrible of the New German Cinema, wrote, directed, produced and starred in over 40 films in his short but prolific life, before passing away of a drug overdose in 1982 aged just 37. Featuring high definition digital restorations prepared by the Rainer Werner Fassbinder Foundation, the films include Satan’s Brew, Rio Das Mortes, Fear of Fear, and The Niklashausen Journey.

Lurking Fear
Castle Freak
The Beyond