STUDIOCANAL to release new 4K Restoration of THE HOWLING, October... 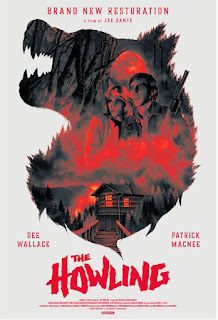 With THE HOWLING, director Joe Dante (GREMLINS, INNERSPACE) and screenwriter John Sayles (LONE STAR, PASSION FISH) created a unique horror shocker loosely based on part one of author Gary Brandner's trilogy of novels.  The film took the genre of werewolf horror to a whole new level, with its dark atmosphere, pointed irony and elaborately modelled special effects and make-up by Rob Bottin (ROBOCOP, TOTAL RECALL).  The film received a Saturn Award for Best Horror Film in 1980.

SYNOPSIS:
Karen West narrowly escapes death at a rendez-vous she has deliberately accepted with a murderer whose name is Eddie. He is shot by the police. After this, the young woman begins to have nightmares and goes to a therapy centre with her husband Roy. But instead of getting better, she gets worse and her relationship with her husband deteriorates. When Roy is attacked by an unidentified animal, his personality and behaviour begin to change...

ABOUT THE RELEASE
The 4K UHD Limited SteelBook Edition and the 4K UHD Collector’s Edition are released with exclusive new artworks, offering bonus material including a new featurette about Joe Dante’s extensive career in Hollywood and the documentary “Welcome to Werewolfland” including interviews and commentaries with cast and crew.

ABOUT THE RESTORATION
THE HOWLING was restored in 2021 by STUDIOCANAL with the VDM lab, under the supervision of Joe Dante.

This restoration project was conducted from start to finish in 4K with a 16-bit color depth bringing all the details from the original negative to life.

The 4K 16-bit scan was made from the original 35mm negative. The image from the 1.20 negative was then cropped to 1.85 in order to respect the original format of the film projection.

The film was calibrated in the P3-D65-ST2084 color space, with a 1000 nits screen. The calibration was based on the reference of 35mm positive copies of the period as well as, for the video part, on the basis of existing reference masters.

The restoration took a few hundred hours of meticulously filtering in order to correct the defects related to the age of the film and to the wear of time.

STUDIOCANAL is proud to present THE HOWLING in DCP 4K, and a DOLBY VISION UHD HDR & SDR video master, through a brand-new Prestige 4K edition.