THE UNITED STATES OF HORROR: CHAPTER 1 trailer + artwork released + call for entries for Chapters 2 and 3

Dystopian Films are excited to release the trailer and artwork for chapter one of THE UNITED STATES OF HORROR, an anthology of horror short films from every single state in the USA. 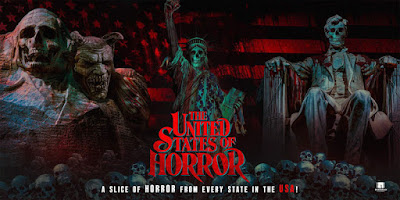 Curated by the team behind Amazon Prime vampire show Age of The Living Dead and festive slashers Once Upon a Time at Christmas and The Nights Before Christmas, THE UNITED STATES OF HORROR spans three chapters narrated by Hellraiser's Pinhead himself; Doug Bradley. Each Chapter is comprised of exciting and terrifying shorts by the very best up and coming filmmakers across the USA.
View the trailer below...

Horror filmmakers should check out their Indiegogo page.

Dystopian Films' Simon Phillips said "This is a personal passion project for us - we love the horror genre so much and the horror community is like no other! I want to ensure that this trilogy is something bigger then the sum of its parts, and we look forward to scaring people in a non pandemic way later this year."