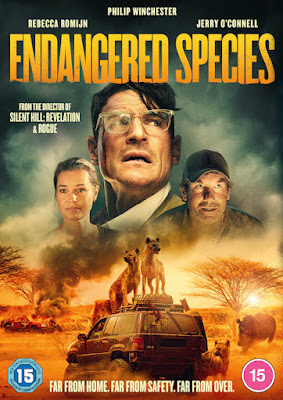 Robert (Philip Winchester), his wife Andi (Rebecca Romijn), teenage daughter Katie, and young son Toby take a trip to the Amboseli National Park in Kenya. Wanting to experience adventure in the wilderness, they head down a forbidden road to a remote area of the vast national park without a guide, when a hair-raising encounter with a wild rhino leaves their car a wreck and the family stranded miles off the main trail.

Under the suffocating African sun, they soon find themselves stalked by hyenas and facing deadly attacks from leopards, but when they discover a vicious gang of armed poachers they find that man is the most deadly animal on the savanna…

Blending fast-paced action in a tense eco-thrill ride, director M.J. Bassett explores the horrors of animal poaching with an empowering message about how ordinary people can fight back against the devastation inflicted on the natural world.