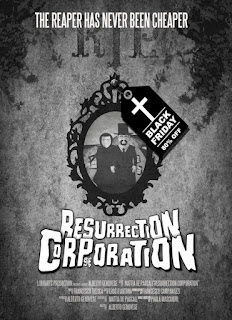 Available now on Amazon prime, RESURRECTION CORPORATION, an animated black and white film about the fear of death.

Caligari is a famous undertaker who's been on the streets since death itself was banned in the city and supplanted by a practical method of resurrection, to which no one is able to resist.

The uselessness of his now obsolete coffins drives the funeral director to an economic and existential crisis. As he is not able to adapt to the changing times nor is he able to confront a society so distinctly tanatophobic.

For Gothic and Black Comedy Lovers, inspired by The Cabinet of Doctor Caligari, Nosferatu the Vampire and Der Golem.

RESURRECTION CORPORATION is available now on Amazon Prime from 1844 Entertainment.

Watch the film on Amazon.co.uk

Watch the film on Amazon.com