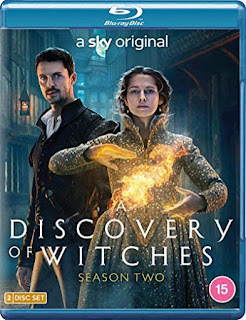 Dazzler Media proudly presents the unmissable Sky original, A DISCOVERY OF WITCHES : SERIES 2, available to own on Blu-ray, DVD & Digital from 12th April.

The brand new second series sees Diana and Matthew hiding in time, now in the fascinating and treacherous world of Elizabethan London. Here they must find a powerful witch to help Diana master her magic and search for the elusive Book of Life. In the present day, however, their enemies have not forgotten them.

Based on Shadow of the Night, the second book in author Deborah Harkness’ best-selling All Souls trilogy, A Discover of Witches is back for an unmissable, fantasy-filled and thrilling new season.

Series Two of A DISCOVERY OF WITCHES is released to UK Blu-ray, DVD & Digital from 12th April

Also available as part of A DISCOVERY OF WITCHES: SERIES 1&2 Boxset on Blu-ray & DVD from 12th April

Pre-order the Series 2 BD from Amazon.co.uk

Pre-order the Series 2 DVD from Amazon.co.uk