NO REASONS on Amazon Prime 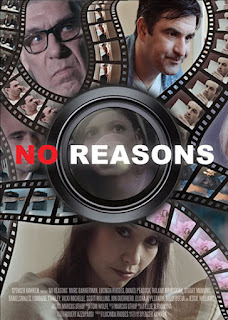 Spencer Hawkin's exceptionally gritty thriller NO REASONS is out now on Amazon Prime. A follow up of sorts to his earlier Death Walks (you can read my review of that HERE), this film is about a couple, played by Marc Bannerman (TV's EastEnders, Footballers Wives) and Lucinda Rhodes (Fall of the Essex Boys), who are looking for their missing daughter.

Daniel Peacock (in a radically different role, to the comedy shows that he's often assosiated with) plays the private detective hired to track her down, by venturing into London's seedy underbelly of criminal gangs, drug dealers and vice girls, as he tries to find out what's happened to her.

Filmed back in 2016, this one has been stuck in post-production for a while, but is now available to view on Amazon Prime. But, and I don't say this lightly, is an exceptionally disturbing watch, in which there are no real good guys, and one that will probably make you feel like you need a bath afterwards.

I actually visited the set and documented the days filming on my YouTube channel, which you can view HERE.

View NO REASONS on Amazon Prime.