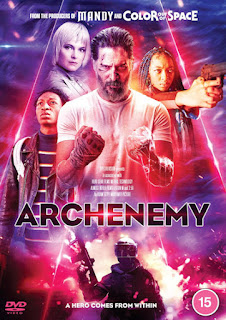 Max Fist is the hero we all need in these troubled times in Altitude’s extraordinary sci-fi action adventure ARCHENEMY, released 22nd February on DVD & Digital.

Max Fist was the greatest hero of a vast city in another universe. He saved his world from destruction but crashed through space and time... and wound up here - a desolate American suburb. Or so he says.

Powerless and a broken drunk, no one believes Max’s stories about his glory days until he meets a kid called Hamster. When the mob comes after Hamster’s family, Max must learn what it means to be a hero — here, now, without superpowers — one brutal blow at a time.

A gritty and moody masterwork of urban mayhem featuring, “Outstanding performances, and stunning set-pieces” (Starburst) ARCHENEMY is a truly original superhero story for the 21st century.