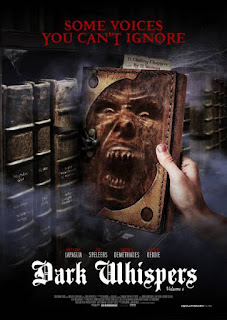 Australia’s first all-female horror anthology releases on all major digital platforms across the UK and Australia on 25 January 2021.  DARK WHISPERS (Vol 1) consists of ten chapters by female directors from across Australia, brought together by Sydney based production company Hemlock & Cedar Films with a wraparound story written and directed by the anthology creator Megan Riakos (Crushed, Deadhouse Dark).

When Clara discovers her deceased mother’s ‘Book of Dark Whispers’, she can’t stop reading the strange stories within its mystical pages. Each weird tale reveals a new facet of the twisted human psyche... or the not-so-human. From the horror of grief to a sharehouse living disaster, from existential dread to right-swiping vampires, there is something for all tastes, as long as those tastes are twisted!

Amongst the cast of DARK WHISPERS (Vol 1) is Asher Keddie (X-Men Origins: Wolverine) who is terrorised by a stalker in the chapter ‘The Intruder’ as well as Ed Speleers (Downton Abbey) and Anthony LaPaglia (Without a Trace) who feature in the segment ‘The Ride’, a darkly comic thriller which was backed by the BBC. In the wrap-around segment, shot by Justine Kerrigan (All About E, Enter the Wild), Andrea Demetriades (Babyteeth, Reckoning, The End) plays Clara, who is obsessed with her late mother’s cherished Book of Dark Whispers.

Inspired by her experiences as a genre filmmaker who had benefited from the support of a close-knit group of female colleagues, Riakos conceived of a project that would amplify female voices in this space. She teamed up with fellow producer Leonie Marsh (co-producer of Kick Ass 2), associate producer Briony Kidd (founder of the acclaimed Stranger With My Face International Film Festival) and executive producer Enzo Tedeschi (A Night of Horror Vol.1, The Tunnel & Event Zero).

They launched an Australia-wide call out for submissions and received a range of exciting short films from almost every state and territory, proving that contrary to popular assumption, there is no shortage of female talent in dark genre.

The film launches in Australia and the UK on Monday 25 January on all major digital platforms with pre-orders on iTunes now available.