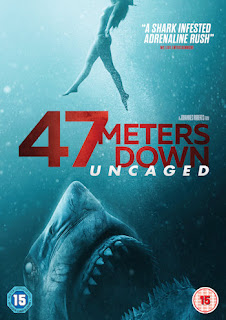 Move over Meg, it’s girl power versus shark terror in this sensationally scary sequel to the smash hit underwater thriller 47 Metres Down.

Four teenage girls go diving in a submerged Mayan City. Their rush of excitement turns to sheer terror, after they discover the sunken ruins are a hunting ground for deadly great white sharks. With their air supply steadily dwindling, the friends must navigate the underwater labyrinth of claustrophobic caves and eerie tunnels, in search of a way out of their watery hell.

The standalone sequel to the smash hit 47 Metres Down has taken nearly $40million at the box office, with writer/director Johannes Roberts delivering another terrific, edge of your seat underwater horror thriller, as a group of teenage girls are terrorised by a fearsome great white shark in underwater caves off the coast of Mexico.

Roberts, the director about to helm the Resident Evil reboot, has lined up a fantastic cast of all female leads to kick shark butt - among them Book Thief star Sophie Nelisse, Sylvester Stallone’s daughter Sistine Rose Stallone, and Jamie Foxx’s daughter Corinne Foxx. Roberts subjects them to some skin-crawlingly effective shark attack sequences, that, combined with a pulsing score by tomandandy (The Wolf’s Call, The Strangers), will send your heart rate soaring. From the sighting of the first shark at the half hour mark, you can kiss your nerves goodbye.

Like an underwater version of horror favourite The Descent, 47 Metres Down: Uncaged is sure to appeal to fans of shark-in-the-water hits The Meg and The Shallows, and monster hit Crawl. A gory and intense, fingernail-gnashing depth charge of a film, your feet won’t touch the floor while you’re watching!