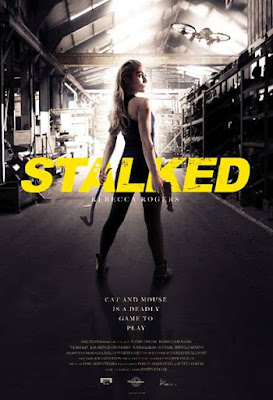 Central City Media is thrilled to announce that it will release Stalked on demand from 30th December.

Written & Directed by Justin Edgar (The Marker, We Are The Freaks) and Produced by Phil Arkinstall, it stars Rebecca Rogers (Shadow of the Tomb Raider, The Rebel, the Solder and the Outcast), Laurence Saunders (The Snarling, The Seasoning House), Stephen Uppal (The Mummy) and Vanessa Donovan (London Unplugged, The Marker).

Stalked featured in the official selection for Frightfest Film Festival 2019 and its star Rebecca Rogers was nominated for the Screen Rising Genre Star Award.

Stalked is a nail-biting suspense thriller based around a highly original suspense concept. Former Royal marine Commando and single mother Sam is brutally kidnapped on her way to the pharmacy. She wakes up disoriented in what seems to be a deserted military factory. Worried that she has left her baby alone at home, she hurries to find a way out but all exits have been sealed.

She soon realises that she is not alone. Someone or something is preying on her. Stalked and attacked by an invisible foe, she must use all of her military skills and knowledge to survive this deadly game of cat and mouse.

When she discovers that her kidnapper is a serial killer wearing a quantum stealth suit that renders him invisible and that the compound is guarded by military drones, she unleashes all her strength in the hope to get back to her baby.

Stalked will be available on the following platforms from 30th December 2019: