Following their highly acclaimed release on Limited Edition Blu-ray, Second Sight is delighted to announce classic Amicus horrors "Asylum" and "The House That Dripped Blood" are set to arrive as Standard Edition Blu-rays, complete with a slew of special features and new reversible sleeve artwork created by Graham Humphreys on 6 January 2020. 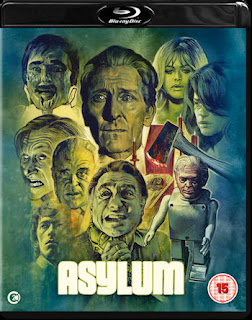 Iconic 1972 Amicus horror anthology "Asylum" from Psycho writer Robert Bloch and director Roy Ward Baker (A Night to Remember), follows Doctor Martin (Robert Powell – The Italian Job, The Thirty Nine Steps) as he arrives for a job interview at a secluded asylum for the incurably insane.

He must prove himself by listening to the macabre tales of four inmates to determine which is the former head of the asylum who experienced a breakdown. We join him on the investigation of four hair-raising horrors…

Frozen Fear stars Barbara Parkins (Valley of the Dolls, Peyton Place); legend of horror Peter Cushing (The Horror of Dracula, Star Wars) stars in The Weird Tailor, Charlotte Rampling (Never Let Me Go, Broadchurch) and Britt Ekland (The Man with the Golden Gun, Wicker Man) star in Lucy Comes to Stay and Herbert Lom (The Phantom of the Opera, Spartacus) and Patrick Magee (A Clockwork Orange, Chariots of Fire) feature in Mannikins of Horror.

The stories build towards a “tightly constructed and well-conceived climax” (Oh The Horror) that will keep you guessing until the very end.

Experience the chilling and thrilling compendium of terror Asylum…but be careful not to lose your mind. 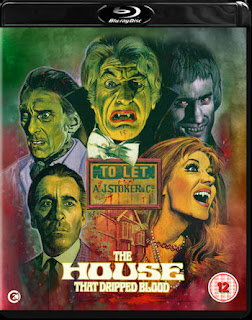 "Asylum" and "The House That Dripped Blood" arrive on Standard Edition Blu-ray on the 6th January 2020 from Second Sight Films.
Posted by Dark Angel at 20:19