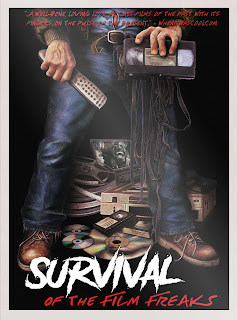 With just about twenty days left in the campaign, the award-winning cult cinema documentary Survival Of The Film Freaks is only 25% away from reaching their funding goal.

Through IndieGoGo, fans have the opportunity to pre-order their copy of the film on Blu-ray or DVD and grab exclusive campaign-only perks, like a physical cassette or digital download of the film’s soundtrack, an exclusive limited poster and limited t-shirt with artwork by Pizza Party Printing, and a perk where the backer can pick a film for directors Kyle and Bill to provide commentary. The campaign will also fund the digital release of the film.

Survival Of The Film Freaks is a documentary exploring the phenomenon of cult film and how it survives in the 21st Century. Through interviews with cult icons such as Ted Raimi and Lloyd Kaufman, alongside modern-day filmmakers like Adam Green and Jackson Stewart, Film Freaks examines decades of film fanaticism and how the 'digital age' has transformed the way we experience movies. At the helm of Film Freaks is the directing duo of Bill Fulkerson (host of Outside The Cinema Podcast) and Kyle Kuchta (Fantasm), who have spent the last three years making the documentary.

To check out the Survival Of The Film Freaks’ campaign, click HERE.