NEXT OF KIN - UK BD review 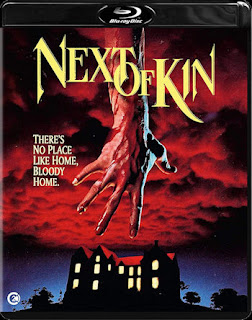 A young heiress inherits more than just care home, in the cult 1982 Ozzie horror NEXT OF KIN, which is out now on UK Blu-Ray and Digital from Second Sight Entertainment.

Young Linda Stevens (Played by Australian TV actress Jacki Kerin), has just taken over the running of an old retirement home, that was founded by her late mother.

But not long after she arrives, she begins to suspect something is not quite right with the place. A couple of residents myseteriously die. Staff start to dissapear, the lights mysteriously go out for no reason and somebody keeps turning taps on.

It seems that something sinister is going on and someone, or something, is trying to drive her and the old folk out of there. But who, or what, would want to do such a thing?

Also starring Alex Scott (Twins of Evil, Abominable Dr Phibes), Gerda Nicolson (TV's Prisoner Cell Block H) and a young John Jarret (Wolf Creek) NEXT OF KIN (not to be confused with the Patrick Swayze film) is creepy Haunted House/Murder Mystery that fans of cult movies will undoubtely want to check out, if only for seeing a young John Jarret in an early role.

Extras on the disc include

Return to Montclare - A look around the home and gardens used in the film as they appear today.

Extended interviews from the 2009 Documentary "Not Quite Hollywood" with Director Tony Williams and co-star John Jarret.

You also get a couple of Director Tony Williams early short films
-Getting Togethor
-The Day we Landed on the Most Perfect Planet in the Universe.

And a deleted scenes section, which is actually a collection of on set stills of a couple of deleted scenes, the original footage to which has since gone missing. Which you navigate using the skip button on your remote.

Theres also a selection of trailers from the Australian and German releases of the film (entitled "Montclare - Erbe Des Grauns") and the alternate opening sequence used for the German release.

The "Before the Night is Out" feature is probably the most bizarre addition, showing the original ballroom dance footage seen on the TV in the film, which was apparently something the director had shot previously and decided to re-use here.

Lastly there's an image gallery, which you navigate using your remote control. Showing the various posters and VHS box artwork that has been used to promote the film, behind the scenes stills, Story boards and location sheets.

A generous selection of extras, which appear to be the same ones featured on the Australian release from Umbrella, which Second Sight has ported over for this.

Next of Kin has been kind of difficult to get hold of on disc for some time, so this release from Second Sight makes a welcome addition to their catalogue. So, if you are a fan of the film, or love cult Australian horrors, then you can't go wrong with this release.