Danishka Esterhazy talks about LEVEL 16, which premieres at Glasgow FrightFest

Ahead of the UK premiere of LEVEL 16 at Arrow Video FrightFest Glasgow 2019, director Danishka Esterhazy tells us about the long journey to get her film made, the empowering nature of female friendship and her love for Sci-fi. 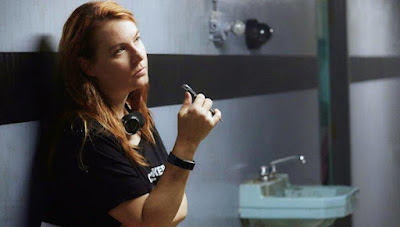 Q) It has been 10 years since first draft to a world premiere at Fantastic Fest. Quite a journey. What inspired you in the first place and what kept you going?

Yes, it has not been an easy road with this film. I wrote Level 16 right after graduating from film school and I had hoped that it would be my first feature film. But I could not find any investors or broadcasters or distributors who wanted to support the film. I love science fiction, love dystopian films, but I had not seen many (any?) with a primarily female cast. Most science fiction films have a large male cast with maybe one or two female actors in smaller roles, most likely the love interest. But as a Sci-Fi fan, I wanted to see more stories about women, with women in the lead. So, I wrote Level 16 and I never gave up on the idea. I was lucky to find a producer (Judy Holm) who loved the story as much as I did. Together, we continued to fight for the film until the film industry evolved and caught up to our idea!

Q) When writing the script, did you always visualise it as a genre movie? Were there any particular influences in that area?

I definitely knew that I was writing a genre film. I had two main inspirations. The first was Logan’s Run - a film that I really loved as a child. I’ve seen it dozens of times. I loved the contained world of the domed city and the idea that the hero had to uncover the truth by questioning everything he had been taught by the system. My other inspiration was Jane Eyre — one of my favorite novels. I loved the early part of the novel that takes place in the Lowood Institution for orphan girls. In an early draft of Level 16, the two main girls were named Jane and Helen. But as I continued to rewrite and revise (I wrote sixteen drafts of the screenplay) the story evolved and changed into the unique world of the Vestalis Academy.

Q) Did any personal experiences inform the writing process?

I did use my own memories and experiences as a teen girl throughout the story. As a teen, I felt very isolated and oppressed by the educational system. I felt that my school was more interested in fostering conformity than feeding young minds or encouraging free thought. What helped me get through that experience was the close relationship I had with my best friends. 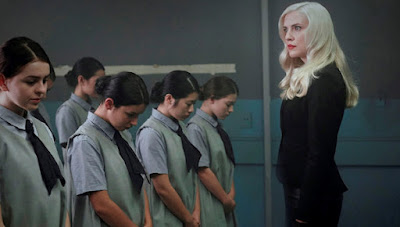 Q) The basic premise of a group of young women incarcerated in a prison-like institution could have easily been moulded into a voyeuristic story of sexual exploitation. How did you resist going down that road?

I did receive notes that encouraged me to add titillating scenes. A specific note that I remember is “you have to show the girls showering naked or you will never get this film made.” I was shocked and dismayed to get these notes. Also enraged, which drove me to move in the absolute opposite direction of story-telling. To make sure that the girls in the story are never treated to a sexually exploitive gaze. To make sure that the story is about their inner life, their intellectual and emotional transformations. And I did shoot a scene in the showers. With the actors fully clothed! Shooting that scene felt like a vindication.

Q) Although described as a "A dystopian thriller", the film has also been cited as a timely story of feminine empowerment and sisterhood. Do you go along with that?

I have been a bit amused to hear the film described as “timely” because it took so long to get funded. But I think the film would never have been greenlit if not for the recent #timesup and #metoo movements. The film industry has not been a welcoming place for women. But I am glad to see that things are beginning to change. I am feminist and proud to wear that label. 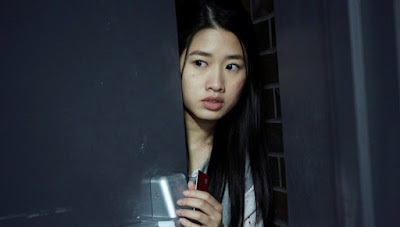 Q) Doctor Miro, as played by Peter Outerbridge, is one hell of a creepy psychologist. A kind of Lector meets Dr Frankenstein. And both Sara Canning’s performance as a Stepford-wife headmistress and Katie Douglas’ heroic teenaged Vivien, are spell-binding. Take us through the key casting process.

I am so proud of our cast. They each embraced their characters with such passion and nuance.

Peter Outerbridge is an actor I have watched and admired for years. I still remember seeing his amazing early performance in Lynne Stopkewich’s Kissed. So I was thrilled when he agreed to play Doctor Miro. Because I knew that Peter would bring subtlety and realism to the part — that he would never dip into melodrama.

Sara Canning was the lead in my first feature film Black Field. We have been friends, and mutual fans ever since. Sara is a brilliant actor who digs deep into every story. We had wonderful discussions about the history of Vestalis, about Brixil’s past, about the themes and layers in the story. Watching Sara as Brixil, you can see so many emotions and thoughts that are never expressed. It is a performance that is enjoyable to watch again and again.

I didn’t know Katie Douglas or her work. She’s a young actor just emerging on the scene. But in her very first audition she had me spellbound. She has such range and talent. She would make unique yet perfect choices. Every day on set she would surprise me — in the very best way. I see very big things in her future.

Q) What do you want audiences ultimately to take away from the film?

Level 16 is a story about friendship. So what I want most is for the audience to care about Vivien and Sophia. To be afraid for them, to cheer for them, to feel heart-break for them. But it’s also a cautionary tale about what could happen in a society where the rich can exploit a vulnerable underclass. What can happen when human life is undervalued and when luxury, perfection and glamour are pursued without restraint.

And finally, I hope that people will reflect on how we educate girls. When writing the script, I read educational manuals for young women from the Victorian period up to the 1960s. Those manuals demonstrated such a shocking disregard for female intelligence and independence - indeed, they seemed designed to stamp those qualities out. Today, the books and toys and lessons aimed at girls do not seem that different. Our educational system fosters inequality from childhood. I hope my film will shine a light on this issue. 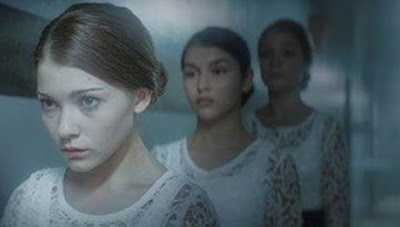 Q) Do you think there are still misconceptions about female directors working in the horror genre?

Unfortunately, yes. When I was trying to raise funding for Level 16 I was told: “women don’t watch science fiction” and “women don’t direct genre films”, which is ridiculous. Being a woman director who loves genre, who wants to make genre, is never easy but the audience has always been more progressive and diverse then the industry. We just have to get past the gatekeepers to our audience.

Q) The genre is currently at its most vibrant and popular, pushing boundaries and asking tough questions of audiences by reflecting relevant political and social issues. Do you think this will attract more female directors into the fold?

There are so many female directors already out there. They don’t get the same access to funding and the same attention in the press. But they are quietly making extraordinary films with small budgets. What we need now is to see women directors given access to the same budgets, the same tools, as their male peers.

I am about to fly to Cape Town to shoot a horror film for Warner Bros. and Syfy Channel. I can’t say anything about it yet — not even the title. But I am really excited to make this film! There will be lots and lots of blood…

LEVEL 16 is showing at the Glasgow Film Theatre on Fri 1 March, 1.15pm, as part of Arrow Video FrightFest Glasgow 2019.

More info about this and other films the Arrow Video Frightfest and the Glasgow Film Festival can be found at...