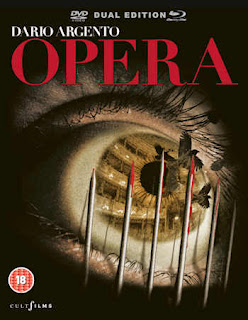 Dario Argento's stylish take on the curse of MacBeth, OPERA (AKA Terror at the Opera) makes it's UK Blu-Ray debut this month in an extras laden Dual Edition BD & DVD combo pack from Cult Films.

Young Opera singer Betty (Christina Marsillach) receives her big break when she's asked to play the lead in a new operatic version of MacBeth, after the person originally cast is knocked down in a hit and run incident.

Although her debut performance is well received, she subsequently finds herself being stalked by a deranged killer, who pounces on her at random and forces her to watch as he kills her closest friends.

MacBeth has long been regarded as an "unlucky" play by those in the theatre, but what will the curse of MacBeth ultimately do to her?

Slick and stylish, with some truly graphic murders, OPERA is a must for Argento fans and Eurohorror-philes, featuring music from Claudio Simonetti and was Argento's last collaborative effort his then partner Daria Nicolodi (who also stars as Betty's agent) and is regarded by many as the film that marked the end of his most prolific period.

This release from Cult Films is a newly restored version, taken from a 2k scan of the original negatives, and looks truly stunning. It also comes with the following special features...

• "Aria of Fear": a brand new candid interview with director Dario Argento, revisiting his work from a fresh viewpoint
• "Opera Backstage": a unique behind the scenes documentary about Dario Argento
directing Opera.
• Restoration featurette: from raw scan to the regraded, restored and reframed final vision

It would have been nice had they also included the directors commentary track that featured on the old DVD from Anchor Bay/Blue Underground. But aside from that, release comes highly recommended and has certainly never looked better.