SHOCK TREATMENT comes to UK BD for the first time ever.

From the writer and director of The Rocky Horror Picture Show comes not a sequel, not a prequel… but an equal to that classic, available on Blu-ray for the first time anywhere in the world, starring the cream of comedic talent in a riotous, unmissable cult musical. 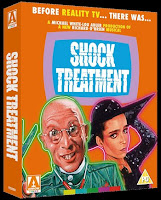 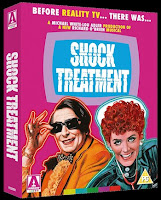 Several years on from the events of the original Rocky Horror, Brad and Janet Majors find their strained marriage put to the test on popular Denton TV show Marriage Maze. Poor Brad is heavily sedated and institutionalised, whilst Janet is given a radical makeover and primed for stardom. But what are the real motivations behind the kooky DTV crew and their enigmatic head-honcho, Farley Flavors?

Featuring a host of familiar Rocky Horror faces including Richard O’Brien and Patricia Quinn as Dr Cosmo and Dr Nation, alongside Jessica Harper and Cliff De Young as Janet and Brad, plus the likes of Barry Humphries and Rik Mayall, this is a sexy, surreal satire that everyone should have on repeat prescription. With a rocking, shocking score from Richard O’Brien and Richard Hartley, including an irresistibly catchy title song, Shock Treatment is the follow-up that’s more than the equal of its predecessor.

Taking potshots at the medical industry, tacky TV shows, and everything in between, O’Brien’s film is bursting with energy and beautifully designed, and, as his character says, “you’ll be pathetically crazy about Shock Treatment - trust me, I’m a doctor!”

Presented in two highly collectable limited edition Blu-ray sets - each featuring one of the devious doctors from the film, Cosmo or Nation, on the packaging - it goes without saying that this world debut release is a must have for Rocky Horror fans. Altogether now, you need a bit of ooooh, Shock Treatment!