FAB Press has today launched a new Indiegogo Campaign to raise the funds needed to re-issue the acclaimed book BEYOND TERROR: THE FILMS OF LUCIO FULCI. 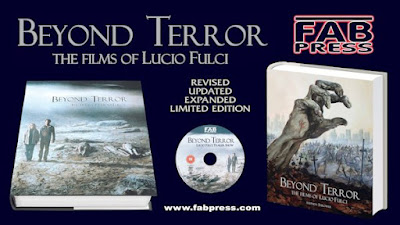 Our goal is to re-issue Beyond Terror in a massively revised and expanded edition along with an exclusive DVD of all known Lucio Fulci trailers, gathered together for the first time ever, all presented in a heavy duty case reminiscent of the Book of Eibon from Fulci’s classic supernatural horror film The Beyond. This special edition of Beyond Terror will never be re-issued and will be vastly superior to the highstreet trade edition of the book that will follow.

This is more than just a re-issue; Stephen Thrower  and FAB Press have spent the past three years working to fully revise, update and expand Beyond Terror to take account of the intervening twenty years of research and every new discovery about Lucio Fulci and his work. In fact so much has changed compared to the first edition that we can confidently claim this is effectively a NEW BOOK that will be of great value even to fans who already have a treasured copy of Beyond Terror in their library.

SO MUCH MORE NEW MATERIAL:

Exclusive to the Beyond Terror Special Edition

• Exclusive Feature 1)  — LUCIO FULCI TRAILER SHOW — a full length DVD featuring a re-mastered collection of every known Lucio Fulci movie trailer, produced exclusively for FAB Press by Nucleus Films’ Marc Morris. All trailers are in English except where foreign language was the only option, and for all of those we have produced brand new specially commissioned English subtitles! This DVD is NTSC format, no region coding, so it can be played wherever you are in the world.

• Exclusive Feature 2)  — EIBON COLLECTOR'S BOX PACKAGING — the book and DVD will be housed together in a custom designed heavy duty presentation box reminiscent of the Book of Eibon from The Beyond, complete with silk pull ribbon to lift the book from the box, textured cover and magnetic closure flap.

• Exclusive Feature 3)  — BONUS CHAPTER — an extensive interview with Lucio Fulci... This new pressing of Beyond Terror will include a final chapter that will only ever be included in the Special Edition — it will NOT be in any future high street or trade edition, neither will it be in any edition offered for sale online anywhere else except direct from the FAB Press Indiegogo page… When Lucio Fulci visited the UK in 1994 as a film festival special guest, he was interviewed by renowned horror journalist John Martin. For the first time ever John has allowed that entire conversation to be published completely uncut, accompanied by rare behind the scenes and personal photographs of Fulci at work and at leisure.

• Exclusive Feature 4)  — THE BEYOND WRAPAROUND BOOK JACKET — Special Edition books will be complete with the trade edition Zombie Flesh Eaters cover design, but they will ALSO include the original cover design from the 1999 hardback and 2003 paperback editions included as an additional bonus dust jacket...

The Beyond Terror Indiegogo campaign is now live, and runs for 35 days, finishing on 28 June. Please visit campaign today and share the link…