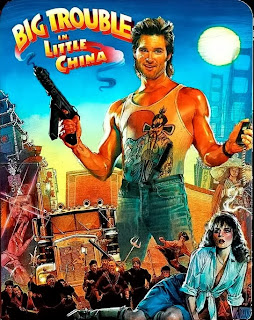 Though undoubtedly best known for his horror works, in 1986 John Carpenter decided to do something different, and brought us this tale of oriental sword and sorcery, albeit in a modern day setting. Producing, what is arguably, his most bizarre film to date and Arrow films are bringing it to UK Blu-Ray.
Teaming up with Kurt Russel, who’d previously starred in Carpenters “Escape from New York” and “The Thing”, Russel plays gruff truck driver Jack Burton, who’s making a delivery in San-Francisco’s Chinatown district, when his friend, Wang Chi’s,  Fiance is abducted by a Chinese street gang.
Agreeing to help get her back, they subsequently get embroiled in a bizarre battle between the gang and a group ancient Chinese sorcerers who suddenly appear and proceeds to wipe them out, taking Wang’s fiancé with them.
With the help of some friends, they discover that Wang’s girlfriend is needed to help one of the sorcerers break some ancient curse and to get her back means infiltrating a series of underground caverns, leading to climatic final battle between Burton, Wang and his friends and the sorcerer minions in an extremely outrageous martial arts battle.
Co-starring Kim Catrell and character actor James Hong, the film was originally a huge flop at the box office, but later proved a huge success on home video and has remained a cult favourite ever since.
This new Blu-Ray release from Arrow films is available in both standard packaging and in a special limited edition steelbook release. As with all arrow releases, the disc comes chocked with special features.
The first of these are a series of interviews with Director John Carpenter, star Kurt Russel, Director of Photography Dean Cundy, Producer Larry Franco, Stuntman Jeff Imada and special effects man Richard Edlund, which run 10-15 mins each.
There’s a selection of deleted scenes, most of which are just extended versions of existing scenes and there’s an extended end scene showing Kurt Russel ramming a car full of Chinese punks into the river.
Also included is a vintage making of feature from 1986, a rather bizarre music video featuring John Carpenter, Nick Castle and Tommy Lee Wallace performing the films main theme, a selection of trailers and TV spots and a photo gallery of production stills.
The film also gives you the option of listening to the isolated music score, or a feature length commentary track, in which John Carpenter and Kurt Russell exchange amusing anecdotes about their time on set.
The film is released to BD December 16th, from Arrow films.
Buy the UK BD from Amazon.co.uk