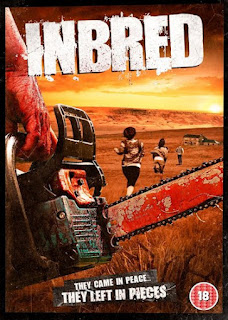 INBRED, Directed by ALEX CHANDON (Cradle of Fear), is one of the most hotly anticipated genre films of 2012.
Four young urban offenders and their care workers embark on a community service weekend in the strange, remote Yorkshire village of Mortlake, which prides on keeping itself to itself. Visiting the local pub, ‘The Dirty Hole’ which serves home-made (and suspiciously hairy) pork scratchings, they quickly realise they’ve made the wrong holiday choice.
A minor incident with some local inbred youths rapidly escalates into a blood-soaked, deliriously warped nightmare for all involved and it’s just a case of who will survive, and what will be left of them?
Starring JO HARTLEY (This is England 86/88, Ill Manors) and SEAMUS O’NEILL (Dead Man’s Shoes, War Horse) as well as upcoming stars; JAMES BURROWS (Ridley Scott’s Robin Hood) and Nadine Rose Mulkerrin (Waterloo Road), INBRED boasts some stunningly realistic visual effects as well as an appearance from The Horror Channel’s EMILY BOOTH and an unexpected but inspired cameo from Emmerdale’s DOMINIC BRUNT as a chainsaw wielding henchman called ‘Podge.’
Officially selected for 2011’s FRIGHTFEST, the film has grown and grown in notoriety and now the wait is finally over as this dark, witty, yet hilariously twisted tale is unleashed in cinemas 21 September with a DVD/ Blu-ray release 15 October.
Extras on the discs include...
Pre-order the UK DVD at Amazon.co.uk
Pre-order the UK Blu-Ray at Amazon.co.uk
Visit the official website at http://www.inbredmovie.com