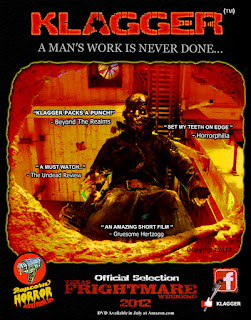 I was recently sent a copy of Casey Crow’s short film “Klagger” to take a look at, and being the sort of chap who’s always happy to help upcoming film makers, eagerly agreed to post a review.
The story takes place in an abandoned factory somewhere in rural , where a worker from a salvage firm has arrived to see about gutting all the recyclable material from the building. But it seems that not all the workers left when the factory closed and something sinister might be lurking amongst the abandoned machinery...
Clocking in at just over 10mins, I didn’t realise when I first sat down to watch it just how short this short-film was actually going to be, so it came as a bit of a surprise when the end credits rolled up just as I thought it was about to get going.

But anyway, the movie is competently filmed and I felt they certainly managed to capture the atmosphere of the old building. The actors also seemed to know how to act, which is always a plus, as opposed to sounding like they’re just reading the lines straight off the paper, which is often the case in these promos. There was also an interesting choice of music for the soundtrack, which left me unable to listen to country and western in the same way again.

Wasn’t entirely sure though if there was supposed to be a supernatural element to the film, it certainly falls into the slasher sub-genre, but wasn’t certain if the killer was meant to be undead, like Freddy Kruger or the Candyman, or just deformed like Leatherface or Jason Voorhees.


In summary I will simply say that overall I was impressed and gave it the thumbs up. Be interesting to see this turned into a full length feature one day.
Visit the official Facebook Page.
Posted by Dark Angel at 18:29