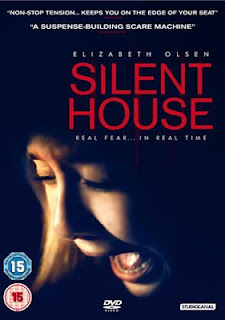 Silent House, a remake of a Uruguayan film La Casa Muda which is allegedly based on actual incidents, will be available on UK Blu-ray, DVD and Digital Download this month.


The film which is shot distinctively in one continuous take tells the story of a young woman Sarah, her father and uncle who have returned to their dilapidated Victorian house in the countryside to repair it to be sold. Over the course of 88 harrowing minutes the audience experience firsthand the terror and panic, as seen through Sarah's eyes as the horror of the evening unfolds.
Shot in real time it soon becomes apparent after a visit from a childhood friend Sarah cannot remember, that all is not as it first seems in the house, with cracks in the walls being the least of the family's worries as their past returns to haunt them.


Silent House is directed by Chris Kentis and Laura Lau who are responsible for the critically acclaimed and innovative horror film "Open Water". The film features break out star and everyone's one to watch Elizabeth Olsen (Martha Marcy May Marlene) who takes on the lead role of Sarah, giving an unsettling and truly engaging performance alongside the other cast of Adam Trese and Eric Sheffer Stevens.
The film is released 17 September, 2012 courtesy of StudioCanal.
Buy the DVD at Amazon.co.uk.
Buy the Blu-ray at Amazon.co.uk
Posted by Dark Angel at 16:01